Dampers are another adjustment in the suspension geometry of a race car. Dampers are the primary element of the suspension that controls the transient handling of a vehicle. They work in conjunction with the springs to form the basis of a suspension geometry. Dampers help to dissipate any vertical movement in the suspension and keep the springs’ movements controlled. In addition, they help the tyres in contact with the track surface while the tyres are under different loads (bumps and ditches). Damper settings come in 2 different forms, bump and rebound. Bump setting is when the damper is compressed and the rebound setting is when the damper is released. Dampers have a natural tendency to overshoot their original length as they release the energy imparted by the original compression. In addition damper settings usually have a low speed setting which is affected under small loads like under braking, turning and acceleration and a high speed setting which is affected under high loads such as kerbs and rough track surface bumps. 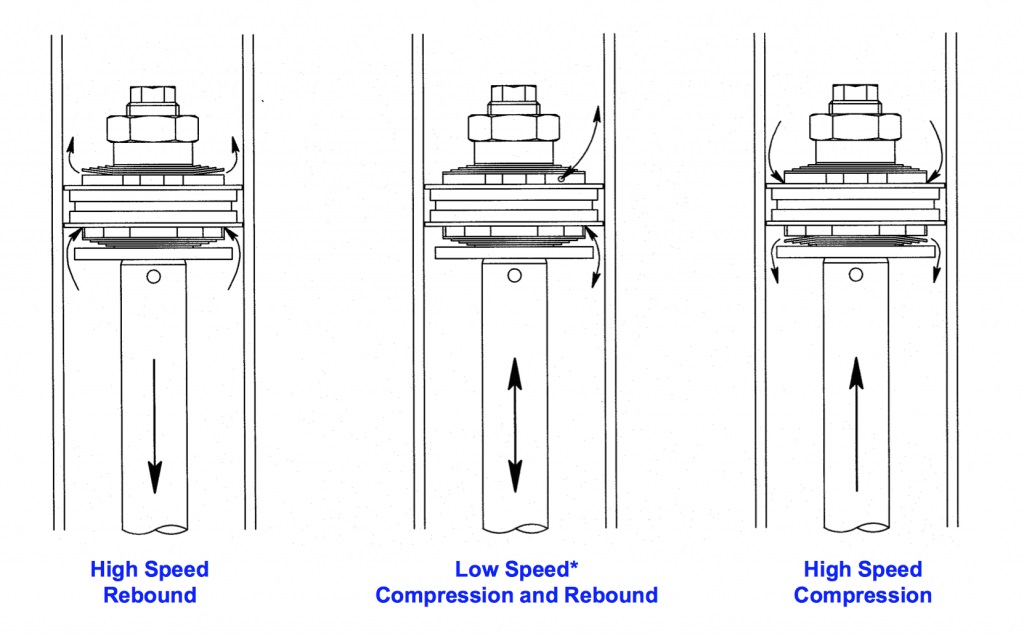 During bump, the dampers and springs absorb the upward movement from cornering or road irregularities (the springs store some of the energy), the dampers then goes into rebound. If there isn’t enough damping then the cycle begins again until the car returns to the original ride height, with a bouncing motion to the car. Another trait of under damping is that loads go into tyre and suspension relatively slowly, this combined with the bouncing effect means a constant varying download force on tyres. Acceleration, braking or cornering in this state, will also vary due to the various download rates. It is important to have enough bump stiffness to be able to deal with uneven surfaces.

On the other hand, If there is too much damping, then it is effectively like running no suspension and any upward motion will be transmitted directly to the chassis. Over damping will result in a increase in the loads acting on the suspension and the tyres. The handling will feel very harsh and hard, this will effect street driving in terms of comfort levels, this might not be desired for a daily driver.

It is undesirable in both under and over damping settings, as it will reduce the handling of the car and will affect acceleration, braking and cornering loads.

Lets go ahead and see what effects changing the bump setting has on the car in the image below. 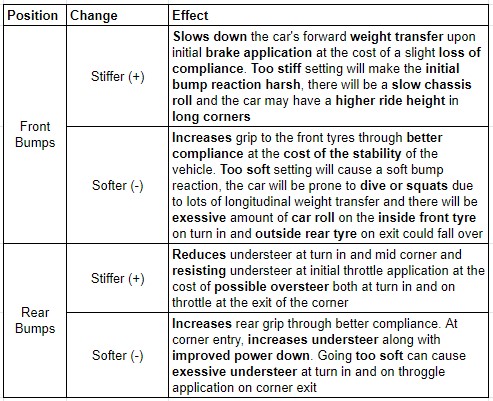 During rebound (following the bump compression phase) the dampers extend back to their original positions, using up the stored energy from the springs. The rebound stiffness needs to be set at a higher value then the bump setting as the stored energy is being released. If there is not effect damping on the rebound, the wheel will quickly return through the static level and start to bump again, with the bouncing effect unsettling the suspension with little control. Any race car which intends to ride the kerbs on apexes, watch out- the compressed wheel could jump of the kerb in extreme instances of rebound setting being too low.

On the other hand, if there is too much rebound stiffness, then the wheel could hold longer in the wheel arch then needed, effectively losing contact with the road as the force to push the wheel back down is slower to respond to the changing surface levels. This state is again far from ideal and it is best to make sure a good level is set for optimal tyre contact with the road.

Lets go ahead and see what changing the rebound settings does to the car in the image below. 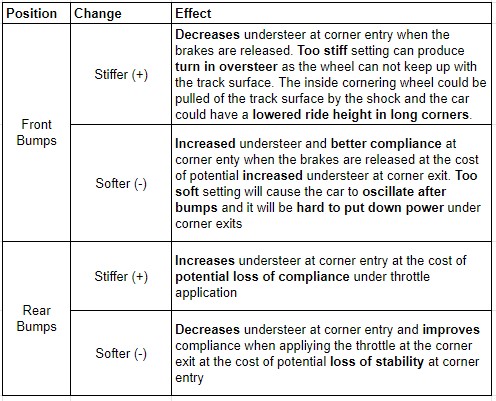